We reached over 30,000 out of school children in 600 schools through an accelerating learning program using existing school structures and teachers during after-school hours.

At the inception of the Zimbabwe Accelerated Learning Programme (ZALP), it was estimated that 300,000 to 350,000 children and young people of school-going age in Zimbabwe had dropped out of school, or had never been to school. More recent statistics from the draft National Assessment on Out-of-School Children (2014), indicate a much higher estimate of 832,000 children aged 3-18 years being out of school. In order to address the growing crisis in the education sector, the Government of Zimbabwe instituted the Education Development Fund (EDF) in 2009, at the peak of the national socio-economic crisis. The second phase of the EDF, launched in November 2011, sought to improve both demand and supply of quality education and ensure universal access to basic education to all children of school going age in Zimbabwe. EDF was specifically intended to provide ‘catch up’ education opportunities for out of school children and youth, and for those who are at risk of dropping out of school.

We implemented the Zimbabwe Accelerated Learning Program (ZALP), which was designed to meet the needs of the exceedingly increasing numbers of out-of-school youth in Zimbabwe. The project was rolled out in 602 schools in 32 districts within all 10 provinces of the country.

Among the targeted vulnerable children, special categories of learners who benefited from the programme included 2,507 children in hard to reach community sites, children from child-headed households, young mothers, farm hands, housemaids, and children with disabilities. In addition to gains in literacy and numeracy skills, ZALP learners also received wrap-around services that included linkages to child protection services and HIV testing and care. Approaches of the Expanded IMPACT Program 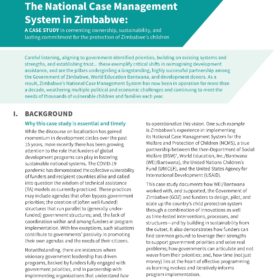